This was to be the last of my early SAS ‘mission’ tales.

I had already taken my readers on anti-terrorist missions in Northern Ireland and – allegedly – over the border into the Republic of Eire. Strenuously denied. I had taken them by air into the deserts of Iran on a hostage rescue assignment. Then it was a counter-revolutionary warfare exercise in the jungles of west Africa. 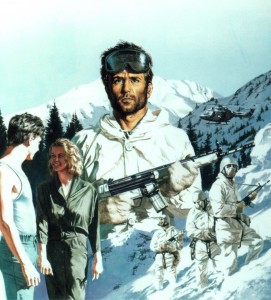 Now the icy dangers of the Arctic beckoned during the dying throes of the Cold War. To visit the USSR at the time, as I did, was to witness the palpable nervousness of the Communist state over the United States’ development of its anti-ballistic missile ‘Star Wars’ system.

In truth it probably wouldn’t have worked very well and was anyway never fully implemented. But the Soviet leadership didn’t know that at the time. They did, however, know that they could no longer compete technically or finacially. It was to be the straw that broke the red bear’s back and eventually saw the end of the Communist regime and the fall of the Berlin Wall.

Imagine then, at the height of this conflict, that a prominent Soviet space scientist – the hapless Dr Nikolai Shalayez – is persuaded to defect to the British while attending an international conference in Stockholm.

But imagine, too, that he still he loves his country, that his heart is not in it. That he has been ruthlessly manipulated and seduced by a British agent. That an SAS team is to snatch him safely and cleanly away…if only life were that simple. 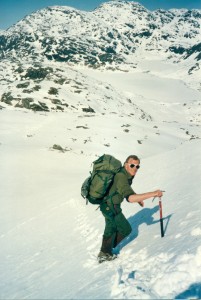 One scientist and both sides desperately want him…the British SAS team and the deadly Soviet rivals, the Spetsnaz pack led by the she-wolf.

This book made a few demands on its author, not least having to learn to ski and rock climb. I spent a week with 42 Commando and the specialist Mountain and Arctic Warfare Cadre in Norway during their annual winter exercise.

There were also trips to Moscow, St Petersberg (as now) and Georgia and visits to Sweden (guest of our charming Ambassador and his wife at the time) in both spring, and then in the deadliest of -50C winter blizzards when I couldn’t get the damn sleeping bag zip done up!

If you enjoyed this book, then click here
to read ICE-BREAK the short story & prequel to That Last Mountain
(Originally published in Mayfair magazine)