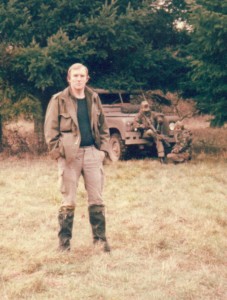 I’d been studying modern warfare in great detail for several years. I’d developed complex rules – land, air and sea – that allowed the realistic recreation of scenarios and outcomes. I’d met with army personnel from troopers to generals, also pilots and naval officers. And members of the Special Air Service Regiment.

At the time the general public new little about our special forces. I had already stumbled across a copy of the men’s magazine CLUB, which included an article on 22 SAS, its structure and operational purpose. Several years later, I was made redundant but, as I found a new position almost immediately, used my three months’ payoff to write WHISPER WHO DARES.

It wasn’t quite complete in 1978 when I took up my new position. The story had been 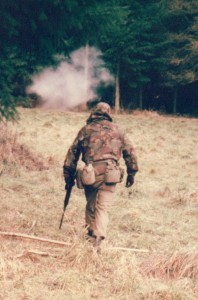 partly inspired by a novel (also made into a film) called The Long Day’s Dying by Alan White. It feature four British commandoes trapped behind enemy lines in World War Two and pitched against a team of four Germans in a similar position. That and the works of Douglas Reeman, who taught me about the in-fighting of people on the same side who are battling a common enemy.

And then there was the big question of the time. Did British covert forces in Northern Ireland ever stray across the border into Eire? I knew the answer to that one. Of course not.