Such is the lunacy of policy at Number Ten and the British Ministry of Defence (MOD) that over 12,000 redundant servicemen and women have had to be re-employed since 2010 to fill vital gaps in Britain’s defence forces.

In particular highly-experienced NCOs, who form the backbone of the Armed Forces, have been encouraged to leave at great expense to the taxpayer. Even as they were leaving, others with similar experience were being rehired at even more public cost.

Since 2010 the MOD has spent nearing £1 billion on redundancy payments to military personnel and civil servants. Many have come back to the army Reserves which has failed dismally to acquire any recruits, let alone the large number required to boost the depleted regulars.
Some 3,600 personnel were being rehired at the same time that thousands of other regulars were being given the boot. 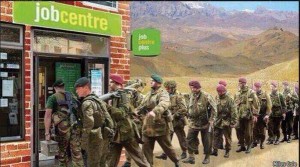 The Royal Air Force has a shortfall of almost 300 pilots of the rank and experience that it requires, although it insists there is no front-line shortfall.

Such is the current chaos that the austerity cuts have caused, that there are now serious shortages of experienced personnel in most British Army units. They are not even being filled by members of the Reserves, formerly the Territorial Army, it has attracted embarrassing few new recruits to date.

The Regular Army is being cut to around 84,000 with some hoped-for 35,000 made up from the new Reservists for whenever the shit hits the fan. But, as by its very nature mostly civil or government service workers will be granted such generous periods of absence, the go-getting calibre of recruits may be in question. And so far even those stout yeomen are hardly volunteering at all.

At a time when the government has expressed its desire to increase the size of UK Special Forces it is diminishing the size of the “gene pool” of the Regular Army from which to sieve out the elite few. It suggests a growing problem with fewer and fewer politicians and civil servants ever having served in or having a proper understanding of the military and how it functions.

By most international consensus, a regular national army numbering under 100,000 members is considered to be a “militia”. 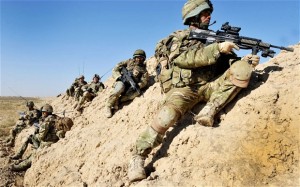 Times may be hard, but with Putin’s Russia rearming and showing increasing signs of empirical expansion and the threat of a vicious Islamic Caliphate growing from Asia to the Atlantic, it is not the time for a country to have its Armed Forces in such chaotic array and its procurement procedures a total circus.

The first duty of any government is defence of the realm and it remains a mystery why a supposedly responsible government would so severely cut its regular Armed Forces to the bone before knowing it can effectively make up the numbers game with weekend volunteers.