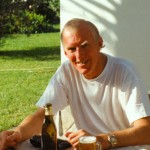 Both American and British Special Forces have been supporting anti-Assad forces in Syria this year, in particular the rebel faction known as the New Syrian Army (NSA).

The British 22 Special Air Service Regiment (SAS) has been deploying small UKSF teams from Jordon to provide direct support to the rebels, including forward air control to co-ordinate strikes from allied aircraft.

New equipment is in play to replace traditional Supercat HMT400s and Land Rover Defenders. The new kid on the block is a militarised variant of the Toyota 4 x 4 pickup. Made by Jordan Light Vehicle Manufacturing, under licence from the Jankel Group, the Al-Thalab (or Fox) comprises a 79 series Land Cruiser chassis mounted with an open tubular superstructure. 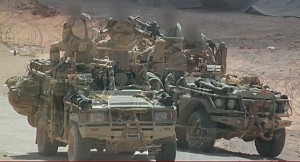 This Long Range Patrol Vehicle (LRPV) is designed to travel 1,200 klicks without replen and sports a commander’s GPMG swing-mount and an aft-facing mount for a Grenade Machine Gun launcher.

As the stranglehold of Turkish forces is currently tightening around the city of Raqqa in Syria, which is the de facto capital of the Da’esh (or Islamic State) terror sect’s caliphate, word is emerging of a daring precursor assault by Britain’s elite SAS.

Rewind to the end of last year: 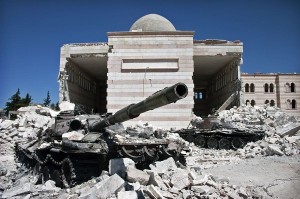 The sun is setting over the rubble-strewn wasteland that is the town of Raqqa.
Momentarily its rays glint on the wings of a loitering vulture , or is it a wraith, a figment of too much heat, too little water? So high, unseen, no sound to be heard from the ground far below.

An acrid smell of gunpowder now lingers permanently in the musky desert air from the constant air attacks on the city. It mixes with the more fragrant aromas of cooking, simple dishes as supplies of everything are running out, as womenfolk prepare evening meals. They are prepared by ghosts, women who are rarely seen in public. When they are, they are indistinguishable in their long, black burkas and invariably chaperoned by a male member of their family.

A beaten-up mini-bus makes its way into the town centre carrying a party of just such women.

There are CCTV camera at every junction and random checkpoints can appear anywhere at any time. It is so easy to break strict Da’esh rules: a woman not properly covering her hair, a man shaving his beard. Being lashed in public is a strong incentive to give up smoking or listening to music. 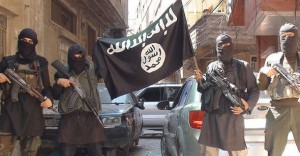 The mini-bus turns a corner and is confronted by a group of black-clad Islamic State militia armed with AK47s and manning a checkpoint. It is near to the civic building that has been commandeered as the ISIS Main Headquarters.

A fighter flags down the van, waves his weapon. The bus slows and the driver winds down his window. He is a thin man with a pointy ferret-like face.

He is sweating. It is humid and he is scared. He waves his papers at the fighter, who looks at them, pretending he can read.

The fighter is angry, probably with himself for being badly educated. ‘Where are you going?’

The driver jerks his thumb over his shoulder. There seven women seated in the back, one other in the passenger seat beside him. All are dressed from head to foot in black burkas. Only the eyes of the women are visible, although most still turn their heads away in a show of modesty.

‘To ISIS Headquarters,’ the driver replied. ‘These are the wives of our leaders. It is the birthday of one of them today. There will be a celebration tonight. Al-Baghdadi himself is expected.’

At the mention of the ISIS leader’s nom de guerre, the fighter takes a backward step. Momentarily he speculates about one woman who holds his gaze for a moment. She has blue eyes, sexy long lashes. Then he quickly changes his mind and waves them through.
The driver breathes again, engages first gear and nearly stalls in his haste to get away.
After a couple of turnings he pulls over. The woman in the front passenger seat shakes her head and indicates to move a little farther up the deserted street, to a dark space between two bomb-scorched trees. There the mini-bus stops, its engine left to grumble noisily.

None of the women speak. The one next to the driver produces a pair of small but powerful binoculars from beneath her burka and focuses on the road.

Nowadays there is little commercial traffic in Raqqa; there is no business to speak of, just subsistence trade, so little reason to do anything or go anywhere. That’s if petrol is even available to you
.
So it was easy to pick up the convoy of three sand-coloured pick-ups coming towards them.

‘On time,’ the woman said. ‘Our man and two escort vehicles. Good intel.’
The driver managed a nervous laugh and scratches his beard. ‘I never let you down yet.’
The woman focused on the middle vehicle as it drove past. ‘That’s our target. In the back.On his own.’

The driver has produced his own binoculars now. ‘That is him,’ he confirmed.
‘Let’s go,’ the woman said.

The mini-bus jolted forward, bumped its way onto the crumbling carriageway and followed the last of the convoy of pick-ups speeding in the direction of Sharksa Mosque.
To everyone’s surprise, the chase was over almost before it has begun. Unexpectedly the 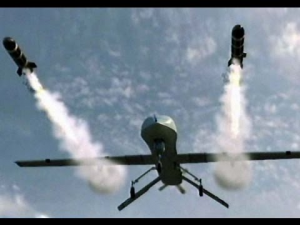 IS convoy pulled over, just beyond the Clock Roundabout. IS henchmen pile out of the pickups and form a defensive circle around their leader as he entered a large building.
Once he has disappeared, his henchmen relax. It didn’t look as though they were expecting their leader to come out again any time soon.

The mini-bus had pulled over, again the woman in the front passenger seat was watching through binoculars. ‘I think we’ve got him. Can you read the co-ordinates?’
‘Roger that,’ said a woman in the back.

High and far away the AWACS missile control aircraft of the US Air Force received the transmission and forwarded it to the controller of the Reaper drone that had earlier been mistaken for a vulture by a farmer on the outskirts of Raqqa.

The Reaper jerked visibly as the instruction arrived and it changed direction, moving in a gigantic circle and increasing its speed.

At their position near the Clock Roundabout, the eight women and the driver of the mini-bus did not see the approach of the Reaper or the release of its Hellfire missiles.
They did, however, witness the blinding pulse of light as the Hellfires struck the building which the ISIS commander had just entered. The mini-bus shook as the ground beneath it vibrated under the impact, causing the building to explode and its inhabitants to be instantly vaporised.

The driver needed no encouragement. He jerked the gear lever into first and pressed the accelerator to the floor. The front wheels spun out a cloud of dust in their eagerness to get away. The driver hurtled his passengers through the city streets as the IS fighters responded quickly to the attack.

Reaction was much faster than the attackers had anticipated.

The town of Raqqa went into immediate lockdown. Radio traffic was instantly jammed, airwaves clogged. Within minutes the word was out of the attack. Gunmen were on the streets stopping everyone. Anyone out and about was being lined up against the nearest wall, accused of helping foreign spies. The infidel enemy was sending women spies to do their fighting, rather than men.

That was when the group of three IS gunmen confronted the escaping mini-bus. Strung out across the road, the gunmen ordered the women to exit their transport.

‘Allah akbar!’ their leader yelled excitedly. ‘Get out with your hands up! You shall walk to heaven with no heads to see your God or hear His voice!’

The driver dropped down from the mini-bus and obediently slid open the side door to allow the women to descend one by one.

And, one by one the women descended to form an orderly line.
The ISIS gunmen were bemused, hardly believing they had actually caught these suspect women who appeared so calm and harmless. 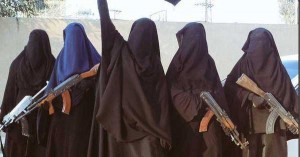 At that point the burkas were thrown aside and all hell broke loose. Two four-man bricks of the SAS opened fire with a hail of bullets from concealed AKs. One gunman died instantly and the other two turned and ran for their lives, throwing aside their weapons.
The women climbed back into the mini-bus and made good their escape.

To this day there is speculation that this was an operation mounted by “The Increment”, specifically on the orders of the British Secret Intelligence Service (MI6) .
“The Increment” is otherwise known as E Squadron SAS. Not the SAS, but of the SAS. Former veterans recruited from various branches of British Special Forces and working together to perform incredible military feats.

Likened by some irreverently to Jesus Christ and His Apostles. 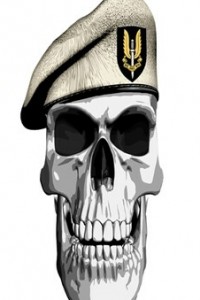