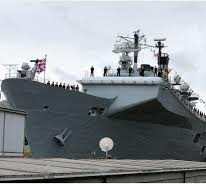 Since then he has worked in the UK, Europe, New Zealand and BAe Saudi Arabia as a senior fleet engineer and aircraft project manager.

Another ‘shot’ from Sharkey – he is, of course, spot on.
The Tornados do not have the legs to provide cover for the drops (I have worked on both variants of the Tornado as a Superintendent with BAe in Saudi).

There is also no mention of the ‘all singing and dancing’ Typhoon! They would require a flight-refuelling tanker aircraft – no mention of that either.
It all goes to prove without doubt the need for a carrier aircraft with ‘legs’ and in-flight refuelling capability – something the planned F35B does not have – and a tacit admission that the Typhoon cannot ‘hack it’ either.

RAF deceit and its lies to politicians in the past – who collectively could not victual a vulture in an abattoir when it comes to naval aviation – are now fully exposed.

Why has the US not asking for Britain’s help in air strikes in northern Iraq. Almost certainly it is because the RAF simply does not have the immediate capability without massive logistical support, including in-flight refuelling tankers.

Other recent RAF requirements appear to be 5-star hotel accommodation with swimming pools, saunas and gyms on full expenses down to the Group Captain’s toilet cleaner. 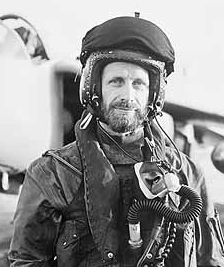 My blog is privileged to carry a copy of an open letter to Britain’s Secretary of Defence from former Royal Navy air ace and squadron commander of the Falklands War, the hard-hitting SHARKEY WARD.
It is no secret that both the Fleet Air Arm and Army Air Corps are aware of the RAF’s current efforts to impose its influence and involvement in all branches of military aviation.

Dear Secretary of State for Defence

I trust that you are aware that you are being surrounded by deliberately misleading advice concerning humanitarian air drops by the Royal Air Force over Iraq and fighter attack aviation ‘advice’ that verges on the self-delusion of Walter Mitty himself.

Media articles have suggested that the RAF aborted the dropping of life-saving aid on the mountain in Iraq because “It was afraid of hitting the recipients of that aid”.

This is the pure and deliberate creation of confusion – often classed more graphically, in frontline Royal Navy jargon, as “blowing smoke up someone’s arse”.

The United States can deliver such airborne aid on a nightly basis. So why is the RAF unable to do so?

Could it be an unwillingness to get anywhere near possible enemy fire, as with the “weapons-tight fiasco” forced on the carrier battle group during the Vulcan bombing raids during the Falklands War?

I know, because I was airborne providing fighter air-defence cover for each Vulcan raid.

I mention Walter Mitty because of the suggestion that our obsolete Tornados could be used effectively against Islamic State forces in northern Iraq.

Where would these ancient aircraft operate from? The US Navy F-18 Super Hornet and Super Growler (the latter providing essential/vital defence suppression for such missions) operate from a US Navy aircraft carrier. These fighters are given extended range by air-to-air refuelling provided by carrier aircraft and/or land-based tankers.

RAF Tornadoes do not enjoy such luxury and, with their excessively short range and endurance, would be a liability if attempting to hit deep strike targets in Kurdistan.

Of course, it is possible to get an RAF Tornado over the Kurdish capital but only with huge logistic ground and air support being deployed and pre-positioned close to the theatre of action. It would also cost a great deal of money compared with an F-18 Super Hornet mission.

You, Secretary of Defence, and your colleagues should be fully aware that our new aircraft carrier HMS Queen Elizabeth – with F 35B aircraft embarked would be unable to emulate the F-18 operations from the American carrier.

That is because the carrier has no embarked air-to-air refuelling capability for deep strike missions. And it has no ‘defence suppression’ capability as provided uniquely by the F-18 Super Growler.

These limitations of Britain’s land-based air power projection and the unnecessary limitation of its new supposed strike carriers (enforced by the ramp and the F 35) should now be the central focus of all attention of next year’s Defence Review.

The importance of jobs for British Aerospace Systems workers will pale into electoral insignificance if, and when, Britain is forced to take initial/autonomous action to protect our energy supplies or trade: nearly all of which comes from or passes through the Middle East/East of Suez.

Author of SEA HARRIER OVER THE FALKLANDS 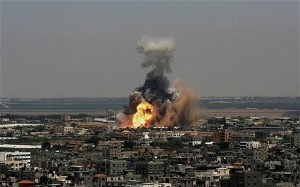 There is an old, typically-English (politically incorrect) joke about the Holy Land called ‘The Miracle’ and it goes something like this:
‘According to the New Testament of The Bible, Jesus was born in Bethlehem, in Palestine, a country where people are called Mohammed, Abdel, Mounir, Aziz, Ahmed, Farid, Omar, Youssouf, Mouloud, etc
‘And Jesus managed to find 12 buddies called John, Peter, Paul, Phillip,
Mark, Thomas, Luke, Mathew, Andrew and Simon ….all of whom drank wine !!!
‘That’s what I call A MIRACLE!’

When I was working in Ramallah for nearly a year, I used to live in Jerusalem. I still have many Palestinian and Israeli friends from that time, as well as many other Muslim and Jewish friends from other countries.

The Palestinians in Jerusalem, Ramallah, Bethlehem and elsewhere have a high number of Christians (mostly Greek orthodox) among them. The Palestinians are the possibly most socially advanced and wonderful people amongst all Arabs. They are also extraordinarily well educated.

In my view, the state of Israel has become a cruel and racist machine which has the blind support of the US Government, and many other people who are scared to say anything against it – due to the background of the Holocaust and historical discrimination.

The simple fact is that #Gaza has all the appearance of a ghetto. It was created by Israel and is perpetuated by #Israel. Israel holds all the cards.

It is simply not the way it can sometimes look on TV. It is mostly lies told by a professionally manipulated media. I am not a soft reactionary, I am a veteran in my field of expertise. I am not given to allowing emotions to affect my judgement of political and geo-political matters. I know what I am talking about.

Of course, Hamas does not have the best of reputations and is recognised as a terrorist organisation by many international authorities. But at least in Palestine, it was democratically elected. In fact it was the only legitimate election in almost any Arab country.

And what did the rest of the world expect? Democracy is a process, and it must start somewhere. The residents of the open prison we call Gaza, a ghetto by any standards, were hardly likely to vote for a mild-mannered moderate like Nick Clegg.

Surrounded and imprisoned, over populated and denied access to anywhere – even to the sea – the population was bound to vote for someone who promised to fight back.

They have to recognise Palestine, dismantle the settlements, remove The Wall and take the boundary back to the 1968 line. And they should stop attacking the Palestinians.

Once they have done that, then the United Nations should send in a huge team of international observers/monitors/peacekeepers.

The ball is absolutely in Israel’s court and Israel owns the court – lock, stock and smoking barrel.

By the way, I know many Palestinians who have Christian names. That is because many of them are Christians!