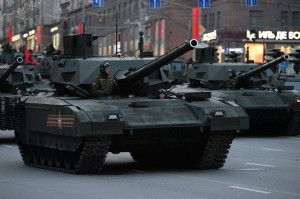 For over the past 10 years Vladimir Putin – as both Prime Minister and President of Russia – has overseen a huge modernisation and upgrading of its armed forces, including submarines and aircraft.
The latest is the new T-14 Armata main battle tank (MBT), proposed variants of which were shown off at the recent Victory Day Parade in Moscow.
Some think that main battle tanks (MBTs) are no longer king of the battlefield. That attack helicopters and infantry-fired missiles now reign supreme. But the truth is the technology balance swings almost each decade one way or the other – or seems to have done during my lifetime and before.
Apparently this new Russian beast sports a 125mm smoothbore cannon and remote-controlled 7.62mm machine gun, active mine counter-measures and a suite of camera offering 360-degrees vision. It travels at up to 50mph, firing on the hoof.
The crew of three live in a protected armoured pod in the front, presumably hence the need for remote HMG and cameras.
It has been suggested in some defence quarters that the Russians may actually be able to deliver in the T-14 a tank that is of greater speed, manoeuvrability, firepower and survivability than anything comparable in NATO armies. 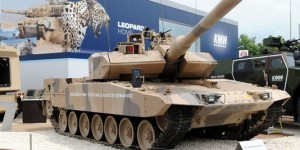 France and Germany have responded by announcing that they are to co-operate in developing a successor to the highly-regarded, but aging German-made Leopard 2 MBT. This is scheduled to be replaced by 2030. However, it looks as though the Russian Armata will be battle-ready a long time before that.

[Any tankies (or anti-tankies) out there want to post on this? Terence Strong]