Britain’s Defence Minister Michael Fallon does not yet seem to have taken in the implications of not having an efficient air force available, now that he has lost the old fixed wing Fleet Air Arm of the Royal Navy.

He may or may not be right about the moral indefensibility of the UK not doing its part to destroy Isis in Syria, but he does not understand that we do not now have the air resources to take effectively the fight to the enemy.

(And if we DO have the resources, why are we not using them?)

The crux of this matter lies in the figures that have been presented:

How is it that, with a force of approximately aging 75 Tornados and some100 Typhoon “multirole” fighter bombers (fourth-generation), only 8 aircraft can be spared to attack Isis?

That is approximately 5% of the entire RAF fighter inventory. And, on a particularly distressful note, these 8 Tornado aircraft can only achieve two missions a day – of which very few actually involve delivering ordinance against the enemy.

If the RAF really does end up administering, maintaining and controlling the whole of the F-35B STOVL Royal Navy Fleet and only 12 aircraft are to be deployed on board the Queen Elizabeth, it could be mischievously argued that with the extraordinarily poor RAF maintenance and engineering record only one aircraft out of the 12 may be available for operations at any one time.
So much for our so-called strike carrier! 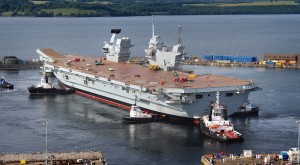 In parallel, Akrotiri is only about 70 nautical miles from the Syrian border and as such represents the nearest comparison that one can make to a land-based strike carrier. Yet given its close proximity, all that space, all those land-based aircraft and all those personnel, the Royal Air Force appers unable to provide our nation with effective air power against a very Third World target, the Da-esh (aka Isis) dream of a Caliphate.

UK ministers and civil servants should take serious note of the inability of land-based aircraft (and more than 2,000 personnel) to provide “Operation Shader”’s 8 fighter bombers to fly more than two missions per day.

In the Falklands War, my squadron of 8 Harrier fighter bomber aircraft flew 601 sorties against the enemy in a period of six weeks – equating to 14 aircraft missions per day – and that was with the support of no more than 120 aircraft maintenance engineers, armament personnel, etc. 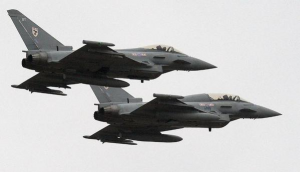 And we, the Fleet Air Arm fixed wing squadrons, achieved victory in the air against an enemy that deployed ten times as many combat aircraft against us.

I would humbly suggest to Defence Secretary Michael Fallon and PM David Cameron, et al, that there lies the difference between the Fleet Air Arm that this Government is throwing away and the land-based, PR-driven Royal Air Force that is very good at “talking the talk” but demonstrably unable to “walk the walk”.

Sadly it must bear the blame for Britain’s current inability to deploy effective air power against the enormous threat of this new Caliphate.

One really must despair of our political leaders who, in spite of advice from proven maritime warfare experts to the contrary, have listened to land-based air personnel who have no successful track record in expeditionary task force combat operations and other forms of naval air warfare.

By entrusting Britain’s future offshore air warfare capability to Tornado navigators and instructors (rather than to seasoned naval air experts) Government, a misguided MOD and an amateur Defence Secretary have surely made Great Britain a laughing stock within NATO, a joke in Russia and, according to Admiral Lord West, “barking mad” in the eyes of the rest of the world.