This is a fascinating one. It can be regarded as a sort of sequel to The Tick Tock Man, although there are no direct connections.

ROGUE ELEMENT was my first ever legal thriller, but I don’t think John Grisham has anything to worry about. There is also plenty of dramatic action.

The true life revelations in this story are astounding, including the relations at the time between the Provisional IRA and the ANC rebels in South Africa and, on the other side, similar connections between the British Security Service – MI5 – and the governments in Pretoria, and Harare in Zimbabwe (formerly Rhodesia).

Another is the contingency plan in place, until the early 1990s, by the Republic of Ireland for a military incursion into Northern Ireland if matters got out of hand. The plan was not to defeat the British Army militarily, but to hold on to seized territory long enough for United Nations intervention and a hoped-for final resolution in their favour. What you read in the book is exactly what was planned.

I was lucky enough to get my own legal team (solicitor Bill Webb and barrister Christopher Sutton-Mattocks) working on the courtroom drama, as well as a welcome contribution by the renowned Michael Mansfield QC.

On the military side of things, the new subject under the spotlight was the art of tracking – this time set in the wilds of deepest Staffordshire. 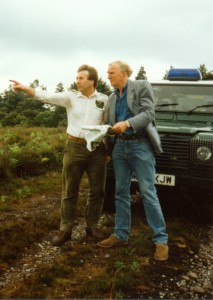 The author on Cannock Chase

Most fun of  all was working on the fiery character of solicitor Sam Browne. I think it can now be safely revealed that in my head she always bore a stunning resemblance to actress Joanna Lumley. Hold that image of her when you read it, and hopefully it’ll work twice as well.