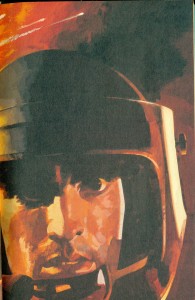 A story about bomb disposal had been on my back-burner for some time. It was completely new territory for me, and I had to start at the beginning. That meant contacting the Ministry of Defence and presenting my authorial credentials.

These were duly accepted by 321 EOD (Explosive Ordnance Disposal) Squadron of the Royal Logistics Corps, and I was invited to attend the next available pre-deployment ‘refresher ‘ course at Kineton.

This was where bomb disposal operatatives re-honed their skills outdoors at a vast, life-sized mock-up of the Northern Ireland theatre with brick-built housing estates, farms, railways…the lot! Each candidate was given a background briefing of “information received” before being sent with his team to deal with the case. Was it real or a hoax? Was it is a known Republican or Loyalist area? Who had reported it? What was the local intel?

It may have all been make-believe, but it was very real and nerve-wracking for the candidates. I remember one man going into a panic because he thought there might be a pressure-mat trigger under the turf he was standing on! Most scenarios were taken from events that had actually happened.

There later followed various trips to Northern Ireland, during one of which I went on a tour of several EOD front-line bases with ‘Top Cat’, the commanding officer at the time. Other trips involved clandestine meetings with ‘political representatives’ of both the Provisional IRA and opposing Loyalist paramilitaries.

It was one of these meetings that, I think, later led the Security Service – MI5 – to take a personal interest in me.

I was determined within the story to give the characters on both sides full rein to their deeply held views and passions without bias from me, in order for the readers to make up their own minds about rights, wrongs and their own thoughts about any political justification for violence. 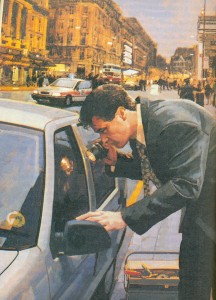 forthcoming, although its members did kindly fill in a questionnaire about what the office was like (but not where it was!), shift patterns, and the like. There can be more than one way to skin a cat.

At the time of writing THE TICK TOCK MAN , 321 EOD’s teams had neutralised over five thousand terrorist bombs. Former operative Kevin Callaghan GM OGM (author of  A Price On My Head, Owl Books) was a fantastic adviser and mentor.