I tend not to write directly about frontline military operations that are ongoing. It is my belief that those who were there should have right to tell their true stories first.

So it came about that WHEELS OF FIRE was written as a retrospective thriller.

I was having a drink with my friend Larry Hollingworth, who had formally been Chief of 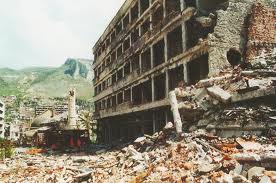 Operations in Sarajevo with UNHCR during the Bosnian conflict in the early 1990s. It had been his job at the time to keep the United Nations aid convoys flowing into the warzone, in order to keep an entire nation of innocent civilians alive during the insane throes of civil war.

It was Larry’s chance comment about the courage and casual can-do attitude of the aid convoy lorry drivers – many ex-British Army – that fired the idea for what turned out to be an exciting and emotional roller coaster of a story.

I was also lucky to have extra help from former Convoy Leader, ex-para Ginge Dawes and Mat Whatley, who served in our hero’s role in real life with the highly-regarded Cheshire Regiment at the time.

Despite the change of some names and places, what you read was all going on – one way or another.

On one level, you have a nasty three-way civil war in full flow with British troops playing piggy-in-the-middle. And on another, you have the CIA and other intelligence agencies with their own agendas, and a crazy environment that can and does create the strangest of bedfellows.

Wherever there is dire conflict there is also, somehow, always plenty of alchohol, cigarettes, very odd characters…and beautiful women.

This book is one of my personal favourites. It encapsulates the atmosphere that develops and exists in all front-line war zones around the world.